What is Grandma Pizza?

For years, Grandma-style pizzas were only made at home by Italian-American grandmothers. Then, in the late 60s and early 70s, New York pizzerias brought it to the counter, where it found a massive following.

Grandma pies are cooked in a pan with ample olive oil to obtain a crispy bottom layer that can support lots of melted cheese and tangy tomato sauce. It’s hip to be square, and not just in NYC – find Grandma-style pizza near you.

Grandma Pizza Near You

Made in New York Pizza 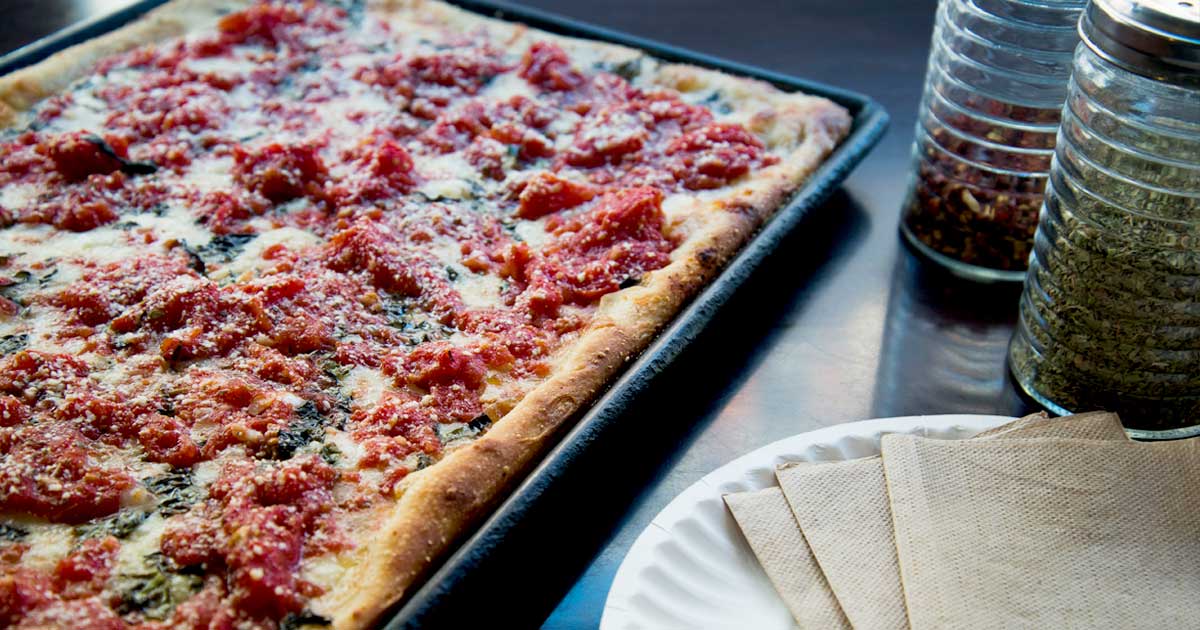 Grandma pizza is a type of thin, square pizza originating from Long Island, New York. It was primarily cooked at home by the Italian women who immigrated to the US with their families.

A brief history of Grandma Pizza

Like other pizza types, the Grandma pizza history is connected to the Italian immigrants who came to the US with their secret family recipes.

The Italian women prepared pies just like their grandmothers did back home, hence the name. Grandma pizza was primarily prepared and eaten at home.

However, there are theories that the Grandma pizza was invented by Umberto Corteo in his family-owned pizza restaurant Umberto's in the late 1960s. The story says he made the restaurant employees' some Grandma pie but was later convinced to start selling it.

The Grandma pie became so popular that many other restaurants decided to put it on the menu, and soon it spread through NY boroughs. In recent years it gained even more popularity and can be found even in cities outside New York.

The characteristics of Grandma pizza

The ingredients typically used for a grandma pie are cheese and tomato over a thin dough. The cheese goes first, directly over the dough, and the sauce is poured on top. Even though Grandma pie is delicious just like this, some pizzerias add additional toppings to it. The dough is made from flour, water, and yeast and is left to proof shortly before baking. It is then stretched into an olive oil coated rectangle pan, which results in a crispy bottom crust.

Even though grandma pie is often compared to Sicilian pizza, there are two main differences between them. It takes longer for the Sicilian dough to rise, which results in a thicker and softer, focaccia-like crust. On the other hand, Grandma pie has a thinner, denser crust.

Secondly, there is a difference in the sauce. While Grandma pizza has more garlicky tomato sauce, the Sicilian pie is characterized by a sweeter sauce. Still, both Grandma and Sicilian pies are made in a rectangle pan and are cut into square slices.

A slice of Grandma pizza can have from 250 to 450 calories, regarding the toppings. 47% of the calories come from the carbs, 35% from the fats and 17% come from the protein.

If you want to lower your calorie intake, opt for classic Grandma pizza with mozzarella and tomato sauce, without additional toppings.

Looking for a mouthwatering Grandma pizza near you? The NY pizzerias Fresco’s and Pizza Italia have delicious Grandma pizza with fresh mozzarella, tomato sauce, and fresh garlic. You can get them for pickup or delivery with just one tap via Slice app.

The pizza was great. The best Grandma pizza in the area.

Q: 🍕What is the difference between Grandma-style and Sicilian pizza?

Q: 🍕How is a grandma pie made?

Q: 🍕Why is it called Grandma-style pizza?